In recent years, there has been greater focus on the plight of "McRefugees" in Hong Kong. The term refers to homeless people who sleep overnight in the city's 24-hour McDonald's branches. Garnering ten nominations at the 39th Hong Kong Film Awards, Wong Hing Fan's social drama i'm livin' it shines a light on the experiences of those who seek refuge under the golden arches. Aaron Kwok and Miriam Yeung lead an ensemble cast that includes Nina Paw, Cya Liu, Alex Man, Kathy Wu, Zeno Koo and Cheung Tat Ming, who won Best Supporting Actor at the Hong Kong Film Awards.

Bowen (Aaron Kwok) used to be a finance hotshot, but landed in prison over misappropriation of public funds. After getting released, he still feels ridden with guilt over the pain and debt he placed on his mother (Nina Paw) and sister (Kathy Wu), and doesn't return home. Giving up on himself, he becomes homeless and finds a supportive community of fellow McRefugees, including an indebted woman (Cya Liu) with her child, a middle-aged man (Alex Man) who's afraid to go home, a street artist (Cheung Tat Ming) who gets by selling paintings, and a loner youth (Zeno Koo) who ran away from home.

This edition comes with trailer, making-of features and deleted scenes. 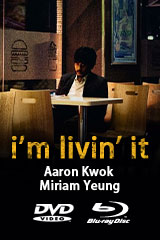