YesStyle and YesAsia serve as Official Sponsors of Otakuthon 2013 in Montreal, Canada 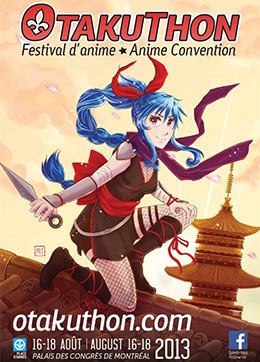 Online retailers YesStyle and YesAsia proudly serve as Official Sponsors of Otakuthon 2013 in Montreal, Canada. The largest event of its kind in Quebec, Otakuthon is a full-fledged, fan-run anime convention that features a number of special guests as well as many activities and events spotlighting anime, manga, video games, artwork and Japanese culture. This year's Otakuthon will be held from August 16 to 18 at the Palais des congrès de Montréal. YesStyle and YesAsia's sponsorship of Otakuthon demonstrates the companies' continual commitment to supporting and promoting the spread of Asian culture and entertainment around the world.

The three-day convention features a wide variety of events and contests, including a cosplay contest, a talent show, live performances by guest performers and an exhibition area with anime-related products. This year, manga illustrator Hamamoto Ryusuke, New York-based Japanese rock band Moon Stream and renowned Italian cosplayer Nadia Baiardi (also known as NadiaSK) are among the guests appearing at Otakuthon 2013. As part of the sponsorship, YesStyle and YesAsia will hold contests to give away VIP entry tickets and weekend passes to the lucky winners.

The largest online retailers of Asian fashion and entertainment, YesStyle and YesAsia not only deliver Japanese fashion, lifestyle and entertainment products around the world, but also actively promote Asian culture and talent through supporting Asian artists and cultural events. In the past, YesStyle and YesAsia have sponsored the New York Asian Film Festival, the inspirASIAN fashion show in Sweden and FUNimation's "Dress Like an International Spy" contest.

"YesStyle and YesAsia provided the convention with promotional opportunities, funding and raffle tickets for the attendees and has helped to elevate the convention to a higher quality, both in content and in service," says Mimmy Shen, Chair of the Otakuthon. "For this, Otakuthon is extremely grateful and hopes that together, we can connect the fans and the industries to continue supporting the spread of this culture."