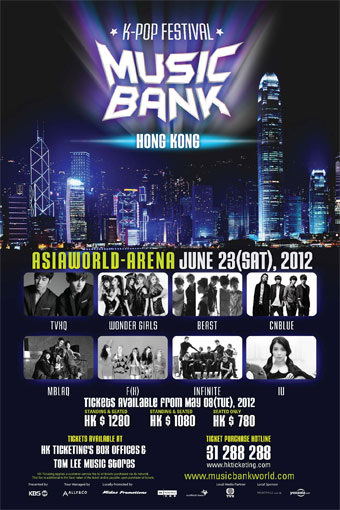 A popular weekly Korean music program that is aired worldwide, Music Bank has been reaching out to global fans of K-pop through a world tour, which has already staged successful shows in Tokyo and Paris. Hong Kong is the third stop of the KBS Music Bank World Tour, and audiences are in for an exciting concert with such a star-studded lineup. As part of the sponsorship, YesStyle and YesAsia held contests to give away free pairs of concert tickets to six lucky winners.

The largest online retailers of Asian fashion and entertainment products, YesStyle and YesAsia not only deliver Korean apparel and music to customers around the world, but also actively promote Asian culture and talent through supporting Asian artists and cultural events, ranging from small campus shows to major K-pop concerts. Just in the past year, YesStyle has sponsored the 2011 Billboard K-Pop Masters in Las Vegas, the 2011 K-Pop Music Fest in Sydney and the 2012 Korean Music Festival in Los Angeles.

Being based in Hong Kong, YesStyle and YesAsia are especially glad to partner with KBS to bring Music Bank to Hong Kong fans. KBS Business Manager Choi Yong Hun expressed, "We are excited for YesAsia and YesStyle's support for the K-Pop Festival - Music Bank Hong Kong 2012 and look forward to bigger collaborations in the future."

About Music Bank
Music Bank is one of the most popular music programs from Korean Broadcasting System (KBS) in Korea, which is broadcast live through KBS World Channel to 72 countries around the world. This weekly entertainment program is an opportunity to see top-level K-pop artists and is the debut vehicle for upcoming artists. It is the driving force behind the famous Hallyu Wave (or Korean wave) sweeping across and beyond Asian markets, and has a very steady fan base around the world as it remains one of the only shows that satisfies, every week, the fans' craving for K-pop.
前のページ   次