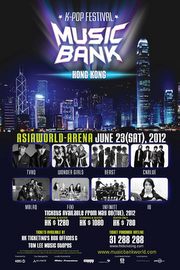 Korean broadcaster KBS's popular music program Music Bank touched down in Hong Kong on June 23, 2012 for the one-night-only K-Pop Festival - Music Bank Hong Kong at the AsiaWorld-Arena. The special concert was part of Music Bank's world tour, which kicked off with a show in Tokyo in July 2011 and went west to Paris in February 2012. As the third stop of the tour, Music Bank Hong Kong brought together the formidable lineup of TVXQ, Wonder Girls, BEAST, CNBLUE, f(x), MBLAQ, Infinite, and IU. Music Bank's regular MCs Lee Jang Woo and After School's UEE also made the trip to Hong Kong, and they were joined by TVB's Crystal Li as hosts of the event.

The waiting halls of the concert venue were filled with fans holding signboards and the sound of cheers and fan chants hours before the doors even opened. The enthusiasm is understandable as Hong Kong is a less common stop for K-pop singers than other Asian regions, so many of the night's artists were performing in Hong Kong for the very first time. In addition to their well-known hits, the artists also prepared special stages and collaborations just for Music Bank Hong Kong.

For those who couldn't be there, here are the highlights of the concert!


After the MCs and artists were introduced, MBLAQ opened the show as the first act of the night! This was also MBLAQ's first time performing in Hong Kong, and they thrilled fans with four of their hit dance singles.


Hot summer, a hot hot summer... With their fun and upbeat songs, f(x) is the perfect group for a summer concert, and audiences got to hear their brand-new hit Electric Shock. The group members also showed their multilingual prowess by talking to the audience in English and Mandarin. 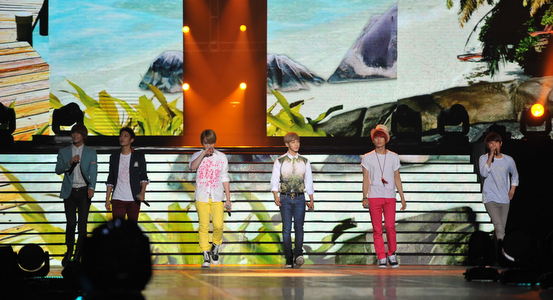 Who needs Boys Over Flowers when you can have BEAST Over Flowers! For the first special stage of the night, BEAST appeared in colorful skinny pants to sing the hit K-Drama's theme song Paradise, originally sung by T-max. 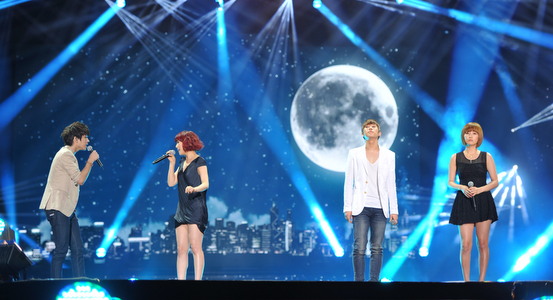 Wonder Girls' Sun Ye and Ye Eun and Infinite's Sung Kyu and Woo Hyun teamed up for the classic duet One Summer Night, originally sung by Hong Kong singers Chelsia Chan and Kenny Bee. The theme song of the movie Chelsia My Love, the English-language ballad was very popular in Korea in the seventies.


Performing in Hong Kong for the first time, IU charmed the crowd with her strong vocals and super cute self. Sadly, she didn't sing any songs from her newest single, but she did sing two of her older hits Marshmallow and Hey.


CNBLUE just held sold-out concerts in Hong Kong earlier in the year, so it's no wonder they were very comfortable interacting with the audience and throwing out Cantonese greetings. Fans sang along very loudly to their energetic pop rock hits. 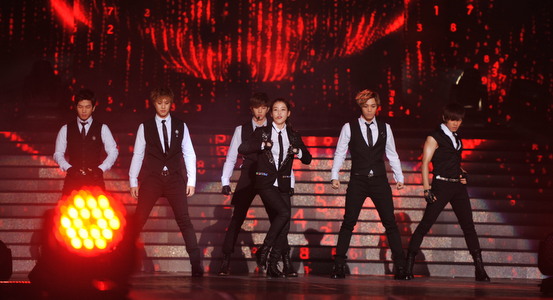 It's always exciting to see MBLAQ cover their mentor Rain's songs, and adding cutie-pie IU to the Rainism mix makes for a near epic collaboration. Definitely one of the best surprises of the night.


Infinite exploded onto stage with BTD, and everyone screamed extra loud for the "scorpion dance". Even though this was Infinite's first time in Hong Kong, it's clear they already have many fans. Leader Sung Kyu said the group doesn't have plans for activities in Hong Kong for the time being though.


The Wonder Girls are definitely no strangers to Hong Kong. Their very first overseas concert was in Hong Kong in 2010, and this time they brought their new song Like This. Speaking in Cantonese, member Hye Lim also said that Hong Kong was a special place to her because she lived here for 14 years. 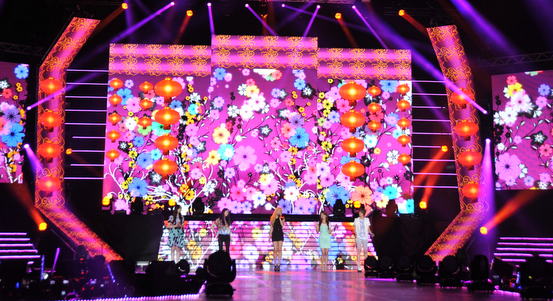 The concert dedicated two special stages to Hong Kong movies and OST songs, which were particularly popular in Korea in the 80s and 90s. f(x) covered the Teresa Teng classic Tian Mi Mi, which was featured in the movie Comrades, Almost a Love Story. 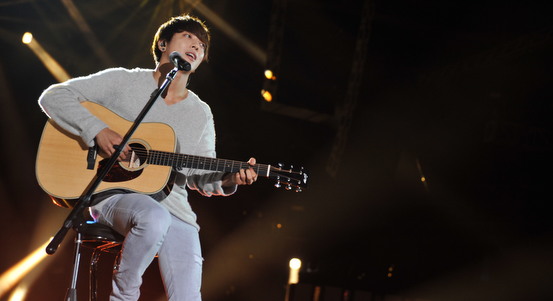 CNBLUE's Yong Hwa performed a moving acoustic rendition of The Brothers Four's Try to Remember, which was used in the film City of Glass. He mentioned during the press conference before the show that his mother really likes this song. Due to a technical glitch, Yong Hwa's performance had to be re-recorded for broadcast purposes - which means the audience actually got to hear the song twice!


BEAST was greeted with passionate cheers for their first time performing in Hong Kong. The deafening sound of the entire AsiaWorld-Arena shouting "Shock" is something to behold. Hyun Seung's bright red hair also screamed for attention.


As expected, the final and biggest act of the night was Dong Bang Shin Ki, who dominated the stage as always with their powerful performances. Yun Ho revealed that Super Junior had told them Hong Kong fans are very passionate so they would like to hold a concert here in the future!


Closing - Arirang / Run To You 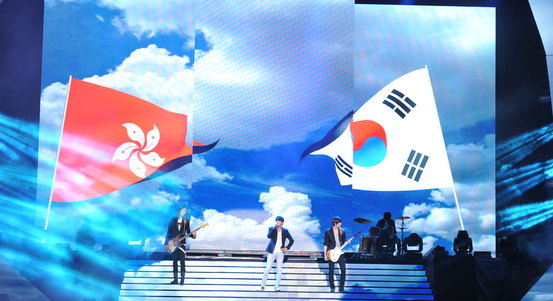 CNBLUE appeared on stage first to begin the traditional Korean folk song Arirang, while the Korean and Hong Kong flags waved regally on screen. All the artists joined them on stage, one by one, for the closing performances.


Yun Ho took the lead to represent the artists and deliver closing remarks to the audience. Music Bank Hong Kong 2012 ended on a high note to the bouncing beats of DJ Doc's party classic Run to You and the requisite explosion of confetti. 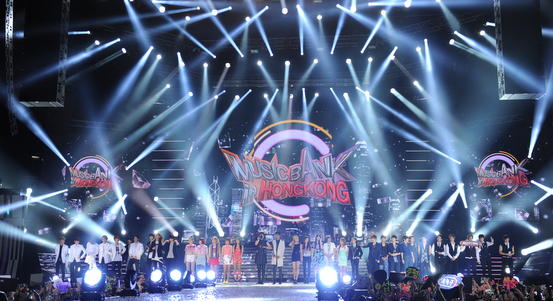