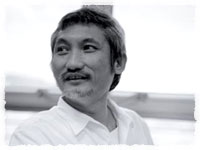 Often described as the Steven Spielberg of Asia, few film makers can be seen to typify Hong Kong cinema as Tsui Hark, the director, producer and actor whose name has come to be synonymous with almost every genre imaginable. With an excess of fifty films under his belt, and in a career that has spanned more than twenty-five years and with no signs of slowing down, Tsui Hark was at the heart of the revitalised new wave of Hong Kong cinema which blossomed in the eighties, scoring critical and commercial successes both at home and internationally to the point of becoming an icon in his own right. Now, with the release of Seven Swords, his latest epic blockbuster, Tsui Hark has returned to the time-honoured wuxia genre in an attempt to breathe exciting new life into a stale genre.

This attempt at genre rejuvenation is to be expected from a director who in the past has single-handedly revived a number of neglected genres, dragging traditional forms into the modern age by fusing them with Western techniques and narrative forms. Known for wild, imaginative films which dip liberally, if sometimes spuriously into Chinese culture and history, Tsui Hark has also shown a keen eye for spotting young talent, having helped established the Hong Kong cinema careers of John Woo, Chow Yun-fat, Jet Li, and Brigitte Lin to mention but a few. Although he has had his fair share of flops and misfires, including several distinctly below average Hollywood efforts in partnership with one Jean-Claude Van Damme, Tsui Hark has been responsible for a long list of classic films which have guaranteed his place on the list of all-time greats. 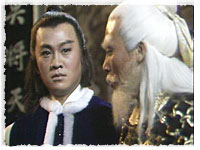 Perhaps one of the most surprising facts about Tsui Hark is that he was actually born in Vietnam, before moving to Hong Kong at the age of fourteen. From there, he moved to America, to study film at the University of Texas-Austin, before relocating to New York in 1975 where he worked on several television projects. It was in television that Tsui Hark would work upon his return to Hong Kong in 1977, at Selina Chow's TVB studios, alongside other future new wave directors such as Ringo Lam (later responsible for a slew of classic films including City on Fire), and Dennis Yu (director of horror gem The Imp). After leaving TVB for CTV, Tsui Hark directed the 52-episode series Gold Dagger Romance, the success of which finally allowed him to move into film making proper. 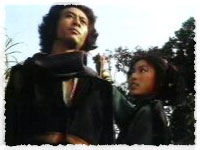 In 1979, Tsui Hark unleashed his debut, The Butterfly Murders, a dazzling mix of bloody martial arts and mystery, whose kinetic, breathless style won the director many admirers amongst critics who hailed him as the progenitor of the exciting changes which were sweeping through Hong Kong cinema and propelling it onto the international stage. Unfortunately, this praise did not translate into box office success, a fate which also befell his follow up feature, We're Going to eat you, a Grand Guignol slice of gory action which helped to further cement his reputation without making much of an impact on the public.

If anything, the commercial failure of these films can be traced to one of the initial contradictions of the new wave of Hong Kong cinema: the attempt to combine modern social issues and exciting new film making techniques with traditional storytelling. Sadly, this often failed to grip a public which at the time was simply looking for entertainment. 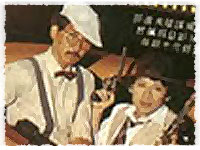 Undeterred by this setback, Tsui Hark moved on to work with Cinema City, production line purveyors of broad comedy films popular during the period. After the success of his first film for the studio, All the Wrong Clues for the Right Solutions, Tsui Hark proceeded to act in the likes of the Aces go Places series, as well as directing the third instalment in the franchise. It was with Cinema City in 1983 that he would direct Zu: Warriors from the Magic Mountain, which would sadly follow the depressing trend of being ignored on initial release, before years later being recognised as an enduring classic. The film had all the qualities which would later become associated with Tsui Hark's future output, combing various elements and threads of folklore with state of the art special effects in a bold attempt to create a modern Eastern blockbuster fashioned after the Hollywood mould. 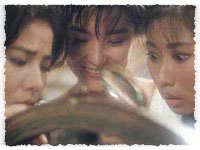 Tsui Hark's visionary approach inevitably led to clashes with the studio, and so in 1984, he left to form his own production company, The Film Workshop. Energised by the possibilities and creative freedom offered by this new situation, Tsui Hark soon released Shanghai Blues, a comedy which saw him move from the lowest common denominator slapstick of Cinema City to his own brand of bittersweet humour. Another important aspect of "Blues" was its strong female characters, a theme which Tsui Hark developed further in 1986 with Peking Opera Blues, which featured the irresistible line-up of Brigitte Lin, Cherie Chung and Sally Yeh. It's here that he began to really stretch his wings, filling the film not only with comedy and action, but genuine pathos and a mixture of historical and social commentary, in a way which would inspire countless other directors. 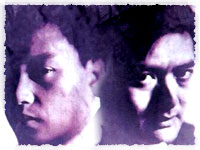 With his star inexorably on the rise, Tsui Hark moved into production, most significantly in 1986 when he teamed up with director John Woo, who at that point had only been known for a string of comedies and lesser Shaw Brothers films. The result was A Better Tomorrow, starring Chow Yun-Fat and Leslie Cheung, an instant classic and one of the most influential and important Hong Kong films of the last few decades. Action packed, gripping and shot through with honour and courage (which could have turned out quite differently, if reports of Tsui Hark's apparent initial idea to feature female protagonists are to be believed), the film punched its way into the cinematic consciousness, kick starting the heroic bloodshed genre which is still very much alive today. 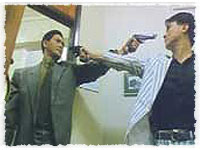 Unfortunately, after working on a pair of sequels to A Better Tomorrow, and what would be one of the genre's defining moments in The Killer, Tsui and Woo fell out, most likely due to Tsui Hark's perfectionist approach, which would see him attempting to control every aspect of his productions. 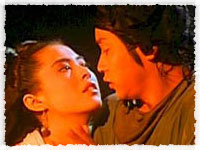 Meanwhile, Tsui Hark found time to produce A Chinese Ghost Story for Ching Siu-tung. Starring Leslie Cheung, the film was a considerable hit, and served to further the popularity of the costumed period horror genre, which had been enjoying something of a resurgence after the success of Mr. Vampire and its progeny. In a bit of controversy, it was later suggested by some that Tsui Hark was A Chinese Ghost Story's actual director. 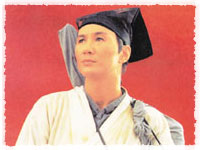 For the next few years, Tsui Hark capitalised on his success, producing a series of sequels and archetypal genre pieces such as A Terracotta Warrior and the excellent Swordsman (the first in what would soon become a trilogy) before returning in 1991 to what he did best -- attempting to revive the martial arts genre, which had over the past decade fallen into mediocrity. To accomplish this, Tsui Hark boldly planned to resurrect the legendary Chinese folk hero Wong Fei-hung by casting Jet Li in the title role. Li himself had fallen in stature since his stunning debut in the 1979 hit The Shaolin Temple, and was then currently living in San Francisco. Despite the grumbling of critics, the fact that the film ran heavily over budget, was subjected to several lengthy delays, and was almost sunk by Jet Li breaking his leg, the resulting Once Upon a Time in China proved to be a massive hit across Asia. It was quickly followed by an even more successful sequel, establishing Li as an international superstar and unleashing a veritable avalanche of historical martial arts and wuxia films, a trend Tsui Hark himself would ride for a considerable length of time. 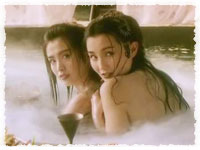 The next period in Tsui Hark's career saw him as an almost omnipresent force in Hong Kong cinema, producing a horde of further sequels to Once Upon a Time in China, as well as a number of similar fantasy and martial pieces. Even with the market virtually overrun with suspiciously familiar films, Tsui Hark was responsible for providing genre highlights such as the mythical Green Snake (a Maggie Cheung starring adaptation of the novel Ching Se, which again saw Tsui drawing on folklore for inspiration), the Dragon Inn remake, regarded by many as an excellent film in its own right, and the lively Iron Monkey. 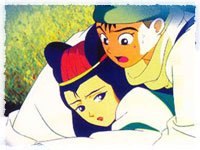 Inevitably, the martial arts boom grew stale, and this decline saw a new moodiness creeping its way into Tsui Hark's work. This was clearly visible by the time he directed the 1995 swordplay film The Blade, an experimental effort which was markedly philosophical, though proved too dark and depressing for the general public. Showing signs of his early creativity, Tsui Hark then branched out with his animated version of A Chinese Ghost Story, though this too was met with disinterest at the box office. 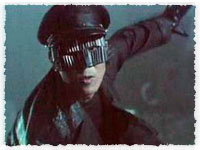 Inspired by the international success of the 1996 Jet Li vehicle Black Mask which he produced, Tsui Hark made the move to Hollywood, directing two films with Jean-Claude Van Damme. The films in question, Double Team and Knock Off met with neither critical nor commercial success, and Tsui's experiences were sadly indicative of the fate that befell many Asian directors who made the move to the West, only to be saddled with lacklustre scripts and distinctly B-list stars. 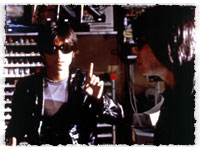 Thankfully, Tsui Hark showed his characteristic resilience, and bounced back in 2000 with the multiple award nominated Tide and Time, an intense mixture of action and existential narrative plotting. Unfortunately Time and Tide was followed by a somewhat less successful remake of Tsui's own Zu Warriors called Legend of Zu. After this came Vampire Hunters, a forgettable attempt to revitalise the popular 'hopping vampire' genre, which further tainted Tsui Hark's comeback. Worse still, in 2002 he directed the abysmal sequel to Black Mask, this time without Jet Li, or indeed, any point. 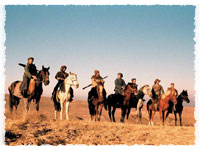 After treading water with a string of below par efforts, Tsui Hark has once again been showing signs of a return to form with his latest film, the big budget wuxia epic Seven Swords. Based on a novel by Liang Yu Sheng, the film is set in a violent, desperate time in Chinese history, shortly after the establishment of the Ching Dynasty, when the practice of martial arts was forbidden on penalty of execution. Against this fascinating backdrop, Seven Swords follows a group of swordsmen bound to protect a village against an evil marauding general. Far removed from the gloss and glamour of recent wuxia films such as House of Flying Daggers, Seven Swords is a grittier, more realistic affair - a typical attempt by Tsui Hark to subvert current trends and produce something that is both entertaining and original.

With Seven Swords under his belt, and a sequel already planned, the future looks bright for Tsui Hark, and it is clear that the career of this master of Hong Kong action has plenty of life left in it. Of course, given his decidedly eccentric and individual nature, it is hard to predict what Tsui Hark will turn his hand to next, though with his domestic and international stature continuing to rise, it is certain that he will remain an influence on film makers for generations to come.