Aspiring comic book artist Tang Kin Bong (Chim Bing Hei) has never been much of a student, made worse by the fact that his older brother is a medical student. Kin Bong starts an office job after high school and becomes enamored with his colleague Chui Yi (Maggie Cheung), but it turns out she already has a boyfriend (Ray Lui). After he gets fired over a dispute with the company, Kin Bong decides to publish a comic with his friends Jing Wan (Yeung Chak Lam) and Ka Kan (Lau Ching Wan). The comic sells well, opening new doors for the friends as they move forward toward their dreams. Success in career and romance, however, leads to fallout in friendship.

Tang Kin-Bong(Jim Ping Hei) loves comics drawing since he was a kid. He quits school early and finds a job. Bong gets on will with his supervisor Mak Ching-Wan (Yeung Chak Lam) and they become good friends. But not long after, Bong and Wan have both resigned from work. Wan recognizes Bong's talent in drawing and decides to run a comics publishing house with the lad and his friend Law Ka-Kan (Lau Ching Wan). Business is going well but Kan's father has secretly sold the copyright, which comes as a greeat shock to the trio. Bong is left for another company but being picked on by his supervisor. Luckily he has Yan Tsui-Yee (Cheung Man Yuk, Maggie), his one-time colleague, by his side supporting him all along. Bong has affection for Yee but knowing that she is already in love with Yeung Shiu-Man (Lui Leung Wai), he decides to keep silence.

Will Bong be able to find his way on comics? Can he win the heart of Yee at the end?
Additional Information may be provided by the manufacturer, supplier, or a third party, and may be in its original language 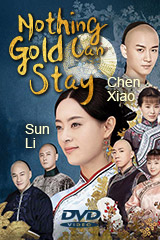