Fruit Chan and The Midnight After 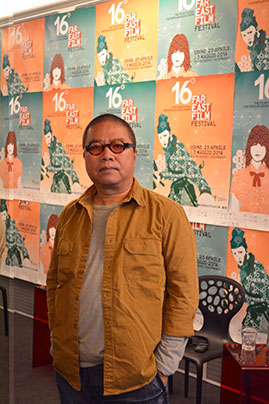 The Midnight After, director Fruit Chan's highly anticipated adaptation of internet novel Lost on a Red Minibus to Taipo, has finally arrived. In addition to achieving box office success, the film was also critically acclaimed as the most spectacular post-apocalyptic film to come out of Hong Kong in recent years. Starring pop duo Shine (Tsui Tin Yau, Wong Yau Nam), Janice Man, Simon Yam, Kara Hui and others, the film depicts the odd and darkly comical adventures of a minibus full of everyday citizens when they become the only survivors in a desolate Hong Kong.

From Independent to Mainstream

"My life in independent film began with Made in Hong Kong..."

After directing Finale in Blood in 1993, Fruit Chan made his first independent film in 1997 with Made in Hong Kong, winner of Best Director and Best Film at the 17th Hong Kong Film Awards. Despite his newfound acclaim, Chan continued working in independent cinema, completing his "1997 Trilogy" with The Longest Summer and Little Cheung, followed by Durian Durian and Hollywood Hong Kong. Due to his choice of topics and his filmmaking style, Chan was consistently labeled as an independent filmmaker. In 2004, Chan left the independent world and entered a new phase of his career as a commercial filmmaker with Dumplings. "After the 1997 Handover, my films, especially Made in Hong Kong, won many awards," Chan said. "Ten years ago, I finally returned to commercial filmmaking with Dumplngs."

The Hong Kong portion of omnibus film Three...Extremes, Dumplings is a horror drama based on a novel by Lillian Lee. Both Chan and star Miriam Yeung's first venture into the horror genre, the film explores the extreme means people take when they become desperate to gain something seemingly unattainable, even when those means are considered immoral. Nearly a decade after Dumplings, Chan finally returned to Hong Kong for a new film, and it was once again due to Lillian Lee.

Supervised by the author herself, the 2013 two-part Tales From the Dark omnibus brought six Hong Kong directors together to adapt six of Lee's horror stories. After working abroad for nine years, Chan finally had the chance to shoot a film in Hong Kong once again when he was invited to direct Jing Zhe. Lee's horror stories have always been more about human nature than the supernatural, and Jing Zhe is no exception. Revolving around the traditional folk practice of "Villain Hitting," Chan kept the audience on the edge of their seats with this uniquely Hong Kong story.

Chan raised Tales as an example: "The first Tales was successful, but the second film wasn't. This was already enough to scare the investor away from a third film."

Lost on a Minibus... 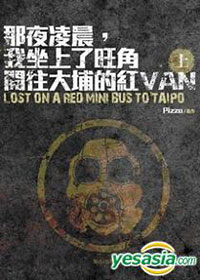 Written by Pizza, Lost on a Red Minibus to Taipo was serialized on the internet (including the Golden Forum message board and the novel's official Facebook page) over the course of six months. After gaining over a million views and tens of thousands of fans, the story was physically published in two volumes, playing a significant role in the newfound popularity of Hong Kong internet authors in the city's literary world.

Told from the first-person perspective of protagonist Chi, Minibus follows his journey as he steps into a late-night minibus from city-center Mongkok to suburban neighborhood Taipo. After passing through a tunnel, Chi discovers that all of Hong Kong has disappeared into thin air, with those on the minibus left as the only remaining beings in the city.

After reading the novel, Chan was interested in adapting it to film. However, packed with foul language as well as sensitive topics like necrophilia, a nuclear disaster and government conspiracy, the novel was not an easy sell to production companies, investors and even filmmakers. "I had one good news and two bad news: The novel was very commercial, and the story would do well at the box office," Chan said, "However, the film would never play in China." With a large part of the budget going to actors and creating post-apocalyptic Hong Kong with special effects, Chan admitted that the production budget scared away many potential investors. 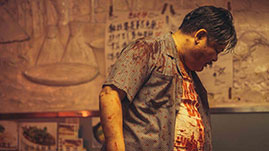 At the time, Chan saw The Midnight After as an expensive independent production and that he was essentially "committing suicide" by giving up on the China market. However, Chan felt that he had a special story that would resonate with Hong Kong audiences. With the help of local film company Golden Scene and its founder Winnie Tsang, The Midnight After finally went into production in 2013. With a limited budget of HK$15 million (a stipulation by the Hong Kong Film Fund), Chan called in favors from actors Wong Yau Nam, Tsui Tin Yau and Sam Lee – all of whom made their acting debuts with Chan's films – to join the cast. 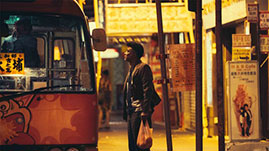 The Midnight After follows 17 survivors in an empty Hong Kong. The key question that they are trying to solve throughout the story is how the city ended up in its current state. At the seminar, Marco Mueller compared the story of the film to television series Lost, another eerie mystery about a small group of survivors trapped in an otherworldly place. Mueller noted that while there are many post-apocalyptic films out there, the genre is very rare in Hong Kong cinema.

Chan said that he has never seen Lost and that the plot in his screenplay comes directly from the novel. He admitted that shooting a post-apocalyptic film in Hong Kong isn't particularly difficult except for having to change his usual directorial style. Instead, Chan thinks whether Hong Kong can produce more films in this genre is up to audience demand, though he joked that Hong Kong audiences would prefer a Hollywood post-apocalyptic film over an Asian one.

The Challenges of Adaptation 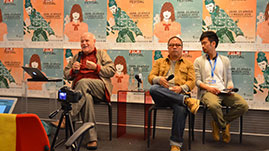 A longtime devotee of Hong Kong cinema, Mueller said that The Midnight After has been hugely popular because of its ability to bring elements of suspense, adventure, crudeness and drama without losing its dark humor and social relevance. Mueller praised Chan for delivering a horror film that has depth and commercial sensibility.

When asked about the challenges the writer-director faced, Chan said that turning someone else's story into his story and translating the original's eerie atmosphere from text to visuals were not easy tasks. He believed that simply shocking the audience would not effectively scare them. Instead, the fear should naturally come from his characters' transformation. 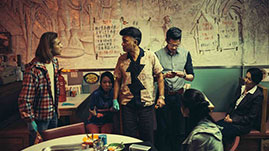 "The novel depicts the protagonist's transformation from a first-person point of view. I changed that by making this event more than just about him, but rather about all the passengers. These 17 people become a microcosm of Hong Kong. Their clashes with each other yield great dramatic and comedic effect," Chan said. Without deviating from the source material, Chan added new traits to the characters (adding other names to Yuki and Chi, for example) to give them more depth. He and his writers also added a tense vigilante persecution scene that elevated the film's dramatic tension. "The scene is a depiction of human nature," said Chan. "It's a reflection of how Hong Kong people persecute each other these days. I think that scene really improved the story."

When writing the reference to Hong Kong's 2017 Chief Executive election, Chan had expected people to laugh at the line spoken by Simon Yam. However, he discovered that audiences begin laughing at the very moment that Lam Suet's minibus driver character mentions the election. "The script isn't just a reflection of human nature; it also expresses Hong Kongers' dissatisfaction with society. I think the film changed the way Hong Kong audiences see mainstream films." 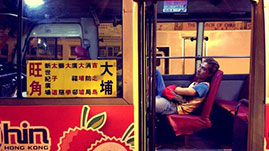 When asked about the media's perception of The Midnight After being a political film, Chan said, "Perhaps it's due to some of the dialogue in the film! Besides, Hong Kong is already in the middle of a heated internal feud, and I'm a director who is very concerned about the city."

Balancing politics, social relevance and commercial appeal in a film is not an easy task. Chan feels that the story of The Midnight After is already quite controversial, and that he could not predict how Hong Kong audiences would react. Nevertheless, Chan insisted that the final product was "the result of careful planning."

The Transformation of Hong Kong Cinema 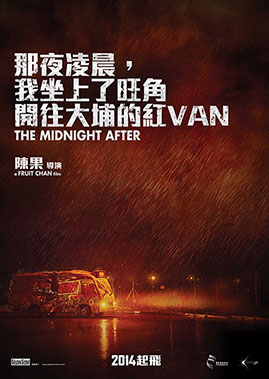 The Midnight After is considered Fruit Chan's second commercial feature film. Chan said that he always felt that pre-1997 Handover Hong Kongers were politically apathetic. However, when the adaptation of Minibus was announced last year, Chan and his colleagues on set felt a sense of anticipation among fans of the novel and Hong Kong film fans. The director admitted that this anticipation was the source of heavy pressure.

Chan added, however, that the pressure didn't come from the fact that he's making a commercial film or that he's tacking a different genre. Instead, the pressure came from how audiences saw Hong Kong cinema. "The local audience thinks that Hong Kong filmmakers can't make an entertaining mainstream film with political elements, which is why making The Midnight After was considered a controversial move. This film is an attempt at something new in the local market, though this doesn't mean that Hong Kong filmmakers are changing. Instead, it means that Hong Kong audiences are starting to care about their society."

The Midnight After was a hit at the Hong Kong box office, but audience response in Hong Kong was very divisive. While some saw the film as a strong continuation of Fruit Chan's independent spirit, some fans of the novel complained about the changes to the original story, and others also complained about the film's open ending. When asked about the possibilities of a sequel, Chan said that the film only adapted about two-thirds of the original novel and that he intentionally left room for a sequel.

"The Midnight After was successful in Hong Kong, but that raises audience expectations for the second film. It's highly likely that we won't be as lucky as last time, as people will want to know what we'll do in part two and how we'll end the story," Chan said. At the end of the film, the minibus survivors were on their way out to Kowloon, though the characters in the novel were on their way to Tai Mo Shan instead. Chan said that the change was a metaphor for the future of Hong Kong.

"We're no longer just being led by the market, and I think the same goes for Hong Kong. Should we just blindly follow along? This is a problem that has to do with the survival of the Hong Kong spirit." 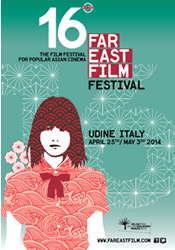 Established in 1999, the Udine Far East Film Festival is an annual event that showcases some of the best in East Asian cinema. This year's edition included over 60 films from China, Hong Kong, Taiwan, Japan, South Korea, Indonesia, Singapore and the Philippines, attracting over 60,000 people from Italy and throughout Europe.